Any Day Is a Good Day to Remember

I graduated first in my class from law school. It was an accomplishment. I was separated from my husband for two of my three years of law school. There was one semester when my loan had not come through and I did not have the money to register. The dean of the law school called the registrar’s office and said, “Let her register. She’ll find the money.” I found the money. I was driving a broken down car to and from school and often had to get along without it. I stood alone at a bus stop alongside woods and walked up a lonely road to the house I shared with three women and the weird boyfriend of one of them. His name was Burt, and he used to answer the telephone during interview season when big law firms were calling to offer me jobs. Partners at those big firms would ask to speak with me and Burt would say, “The chick’s not here.” Then he would slap the phone down in its cradle. I have no idea what people thought. Burt looked like the sort of person who stops to offer you a lift on a cold and snowy night, and you decide it would be better to risk frostbite by walking alone in the night in the midst of a snowstorm than to accept that offer.

On my graduation day my parents and my sister Kathy and her family were present. My mom had brought me a bouquet of roses. She was remembering when I graduated from high school. I was first in my class then, too. She later felt bad because other parents gave their daughters flowers, and I didn’t have any. I had not noticed. My dad had his camera, and he was going to get a picture of me. But the graduation took place in the Shrine of the Immaculate Conception. There was a certain amount of pomp and formality that made a six feet and two inches tall man reluctant to slip from the pew where he was seated to run forward and get that photo as I crossed the stage with my classmates to accept my diploma.

I received a certificate for being first in the class. Dad was not expecting that photo opportunity. When it happened, he got up and strode forward down the center aisle, unimpeded as no one else was up and about. My classmates were very kind. I understand that they gave me a standing ovation. I never saw it. As I came down the steps of the cathedral holding my certificate, my dad was waiting at the bottom of the steps to enfold me in a huge hug. He is the only person I recall seeing. 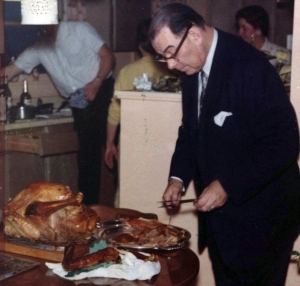 I was born on my Grandpa Kayo’s birthday. He loved that we always celebrated our birthdays together. What a wonderful thing it was to press my cheek against his as we bent our heads forward to blow out a candle on a shared cake at family celebrations. I can still remember the feel of the stubble on his cheek. I can remember how he hugged me and pressed his lips to my forehead. He loved all seven of his grandchildren equally, but I felt special when we were together. He loved to get a kid on either side of him on the couch and wrap his arm around us and kiss the tops of our heads every few minutes. 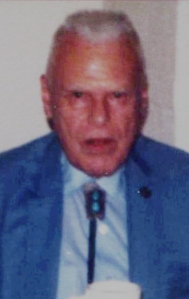 My Grandpa Tom was a polio survivor who walked with the help of a leg brace and a cane. He used to have a great deal of pain, but the only way you could tell was that he would huff out air as he rose and sat. He was an engineer and an inventor. He was not the warm and fuzzy sort of grandpa that Grandpa Kayo was. But he called us “tootsies” and loved having us visit so he could tell us Indian stories from when the West was being won and his family followed the rails. His dad had been a railway engineer–the kind that designed railways and train equipment, not the kind who drove a train.

When I was a little girl I sometimes felt “math anxiety.” I used to go stay with Grandpa Tom and Grandma Elsie on weekends. He used to help me with my math homework. He prepared extra problems for me and taught me how to answer them. We sat together at his formal dining room table surrounded by framed Currier & Ives prints and Grandma’s homemade antimacassars. He would say–as though this was the most profound thing he had ever handled, “Now, Cheryl, how fast must a train move if it must leave Rock Island at eleven in the morning and travel 175 miles to Chicago in 2-1/2 hours?”

I remember that I once brought to him a word problem. It was one of those problems that started with “There are five houses on the street and a person from a different nationality lives in each house. . . .” After he read the problem aloud, he looked at me and he said, “Who has time for such twaddle? Aren’t they teaching you to read? Why don’t you read what is on the mailboxes if you want to know where the German lives?” Nevertheless, he painstakingly showed me how to chart the facts and figure out whether the German lived in the blue or the red house.

Thanks to him, I used a slide rule and a book of algorithms sometimes. I could not use these tools in school. No one used a slide rule in high school. But he wanted me to know that, once you mastered the basics, there were tools to take you to the big leagues. I got straight A’s in high school in math classes. He was very proud of that.

Kathy and Jeff at Maureen’s Wedding 2012

My brother-in-law Jeff is a father to two daughters. He has two grandchildren. He is tough on himself. It makes him impatient sometimes. But you put a crying baby in his lap, and he starts whispering to the child, and tears disappear. There are smiles and coos. He is filled with peace and so are they.

My brother Danny is a stepdad. People in the family sometimes call him “our Danny.” He is someone so filled with blithe spirit that you want to be close to him and share his jokes and his carefree play. He has shouldered lots of responsibility since our dad died, including becoming a stepfather, but he is always there for family. He is a great stepdad. One of my favorite stories is about how Al, his stepson was out drinking with friends. Al knew better than to drive after drinking, so he called home when the party was over. Danny got in the car and went to pick up Al and his friends. It was late at night and quite a distance, but Danny has always been a good sport. As they drove home in the convertible sports car that Al’s dad gave Al when he was old enough to drive, the guys were rowdy. A police car pulled them over, expecting to find an inebriated driver at the wheel. But, when he walked up, there was my brother in the driver’s seat. His somewhat rakish smile was in evidence as he assured the officer the driver was sober even if the passengers were not. Like my dad before him, my brother believes in a great party.

It is Father’s Day, and I honor all fathers. I have been very lucky. I cannot recall a time when any of the “fathers” in my life have let me down. Every memory is filled with love. And any day is a good day to remember them or by which to remember them.

Filed Under: Living Life to the Fullest
Tags: families : fathers

3 Comments to “Any Day Is a Good Day to Remember”